In what was one of the most competitive MDHL seasons in recent memory — just four points in the standings separated first place from last place — the playoffs, and championship, did not disappoint as Sunday’s finale ended in thrilling fashion. 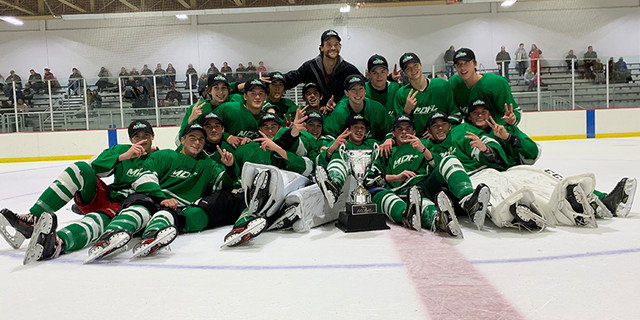 Entering playoffs as the six seed, Team Green may have been the reigning champ but had a tough road ahead as the last-place team. The polar opposite, Team Blue went 6-4 in the regular season to earn the top spot and a first-round bye to begin the weekend.

James Jentz (Brighton, 2020) opened the scoring five minutes into the opening period off a feed from Krys Petryla (Orchard Lake St. Mary’s, 2020) to put Team Blue out in front.

Green responded with three unanswered goals in less than five minutes of game action as Onstott, Braeden Fouchea (Rockford, 2021) and Parker Lawrence (Kalamazoo, 2020) found the back of the net in convincing fashion.

At 3-1 late in the first and everything going Team Green’s way, the game could have quickly gotten out of hand if not for an Allan Benit (Brighton, 2020) strike that beat Tate Potteiger (East Grand Rapids, 2020) with just 42 seconds left in the period. The goal corrected what could have been a tailspin for Team Blue and pulled them back within a goal before heading into the locker room.

While teams traded blows in the second half with Petryla tying the game at 3-3 in the second and both Green and Blue adding goals in the third to make it 4-4, goaltending and defensive efforts down the stretch were fantastic. Team Green’s Caden Fisher (Grandville, 2020) and Team Blue’s Chris Wozniak (Brighton, 2021) combining to stop 40-of-43 shots in the second half of the game in what was easily the most intense period of the season with a true playoff-type atmosphere.

There was one moment with eight minutes left in regulation where Green came with an aggressive flurry around Wozniak’s net.

Sprawling and without a goal stick, the 5-foot-4 goalie hurled himself repeatedly from post to post, fending off a swarm of shot attempts all within six feet of the cage. Unable to freeze the puck and in desperation mode, defenseman Michael Small (Novi, 2020) came to his goalie’s aid blocking a shot while Hunter Allen (Trenton, 2020) and Carson Kleven (Livonia Stevenson, 2020) barreled their way into the pile doing anything to keep the puck from crossing the line. At one point it looked like referees could have blown the play dead for a player covering the puck in the crease but just then, Onstott plucked the puck out of the mayhem and fired another shot into the fray, until finally Wozniak could freeze the puck.

Team Blue’s bench erupted and the crowd of 40 or 50 on hand were left wondering what it would take for either team to break the tie.

Chances continued until the very end of regulation and 3-on-3 overtime didn’t disappoint either. Blue certainly carried momentum after surviving that flurry with Jentz, Petryla and others either finding or creating quality open looks down the stretch but just missing their mark on shot attempts.

Then, just 23 seconds into double overtime, the right-handed Onstott streamed down the left wing on a 2-on-1, crossed the blue line and ripped a wrist shot over the far shoulder of Wozniak, sending his Team Green teammates spilling over the bench in excitement and effectively ending the 2019 MDHL season with an exclamation point.

Lots of players around the state look to be in mid-season form and ready to hit the ground running when the ‘19-20 regular season gets underway in November. I’m excited to see these players, and many more, carry the momentum from a productive fall season back to their respective programs this winter.