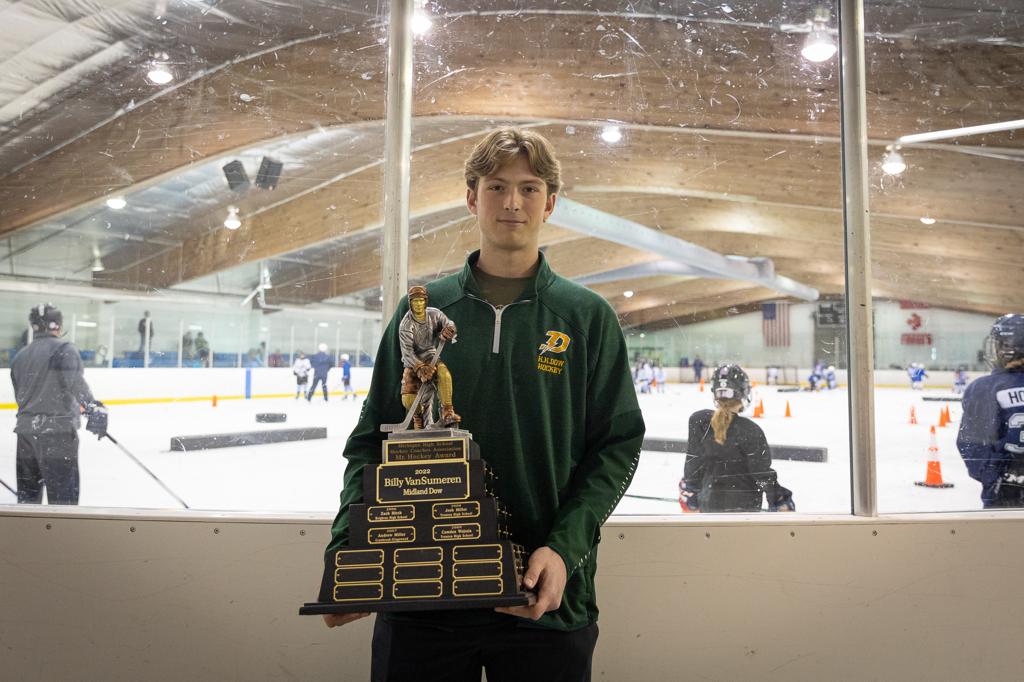 LIVONIA - Billy VanSumeren was staring at some of the names engraved on the trophy he was just presented.

“It’s unreal,” VanSumeren said when asked how it felt knowing his name would now appear alongside theirs. “I’m just seeing these names right now, and it’s amazing to be talked about in the same light as guys like that.”

On Sunday, VanSumeren was officially named the 2022 recipient of the Mr. Hockey award, presented annually by the Michigan High School Hockey Coaches’ Association.

VanSumeren was presented with the Mr. Hockey trophy prior to a Team Michigan practice at Eddie Edgar Ice Arena in Livonia.

A senior forward with Midland Dow, VanSumeren recorded 71 points in 28 games as he led the Chargers to the first state championship in school history. 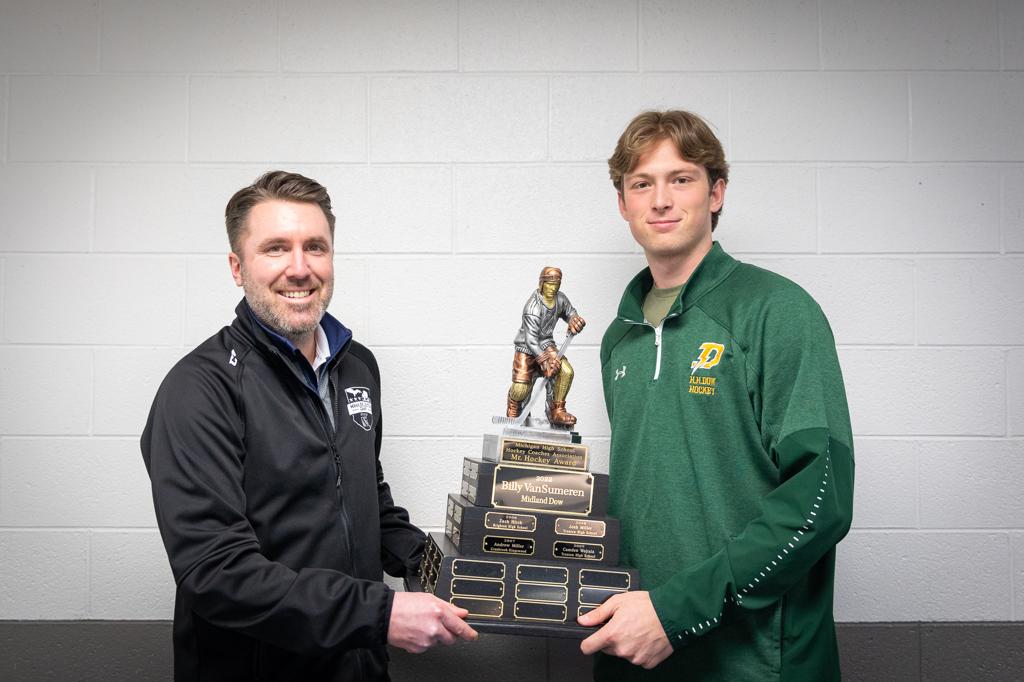 “It’s awesome,” VanSumeren said. “I wasn’t really thinking about this at the beginning of the season, I just wanted to go out and enjoy my senior year and I think my senior year couldn’t have gone any better. We won a state title, I got to win Mr. Hockey, as well - it’s just a great honor.”

With a 6-foot-5, 214-pound frame, VanSumeren wasn’t hard for the other team to find. Stopping him, however, was a different story.

“What an incredible honor for anybody, right?” said Dick Blasy, head coach of Midland Dow. “For it to be Billy, it’s well-earned, and such an incredible honor. There are so many good hockey players playing high school hockey these days, and it just speaks volumes about what’s Billy has accomplished this year and over his high school career.

“He was, offensively, he was the guy that everybody knew. Everybody knew that he was the guy that we were expecting to generate the majority of our offense, and he, I’ve been doing this for 27 years, and he’s the best goal-scorer I’ve ever coached. He’s just one of those kids who, when he has the puck, he’s just so dangerous, and he has the ability to put the puck in - once he gets across the blue line, he can score from anywhere.”

VanSumeren recorded 57 points in the regular season, before posting eight in two games in the regional playoffs. In the state tournament, he racked up six points in three games, helping Midland Dow to wins over East Grand Rapids, Calumet and Orchard Lake St. Mary’s en route to the first state championship for the city of Midland in MHSAA hockey history.

“It means everything,” VanSumeren said of the state title. “It was awesome. It was the greatest feeling in the world to be able to do that for our town and for our school.”

Blasy said that VanSumeren is the type of player any coach would be lucky to have.

“…He’s so humble about things that he knows that this is an incredible honor and that it could have gone to, not just anybody on the Dream Team, but there were kids who weren’t even on the Dream Team who could have won this, and he’s fully aware of that. He knows that, does this mean he’s one of the best in high school hockey? Yes, but he knows he’s a fantastic player among fantastic players. That’s just the way he is, he’s quiet, he’s humble, he’s a good student. He’s respectful. He’s all those things that you would want in a son, or a kid - I can’t say enough good things about him.”

VanSumeren is the second player from the Mid-Michigan area to be named Mr. Hockey in recent seasons, after Saginaw Heritage’s Brady Rappuhn received the honor in 2020.

“It’s really nice for this area to get that type of recognition,” Blasy said. “Saginaw Heritage has put together a lot of good runs, they had Brady Rappuhn two years ago win Mr. Hockey, and now us, winning a state championship and then Billy earning Mr. Hockey - it’s always nice when you can get recognition in this part of Michigan.” 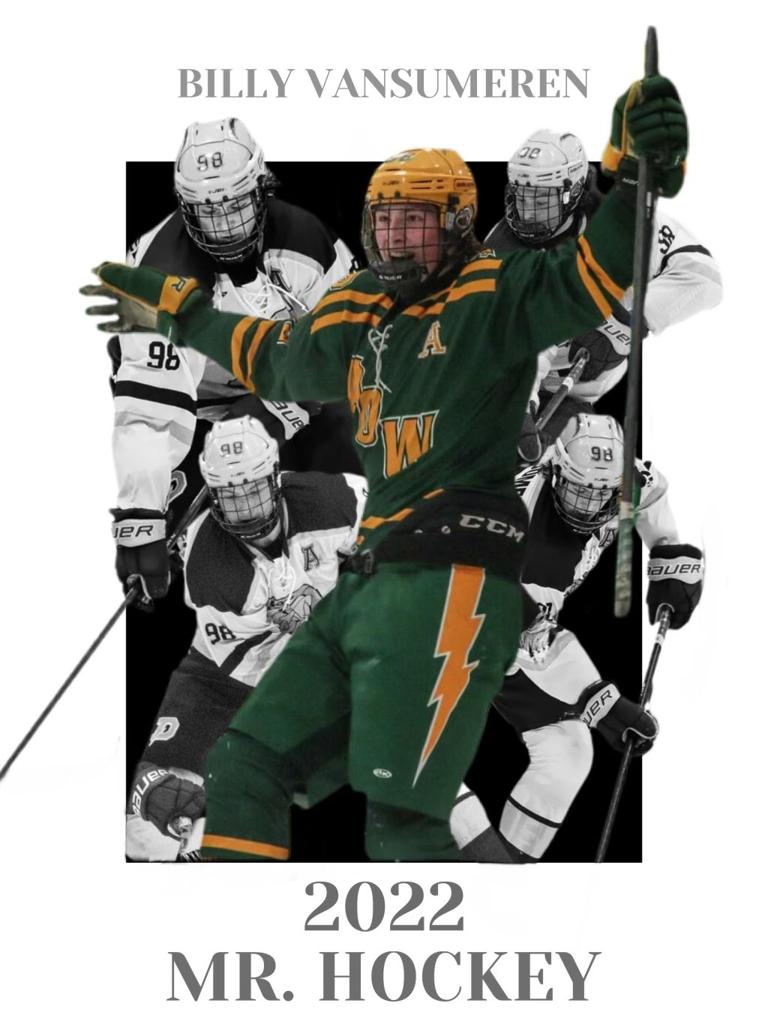