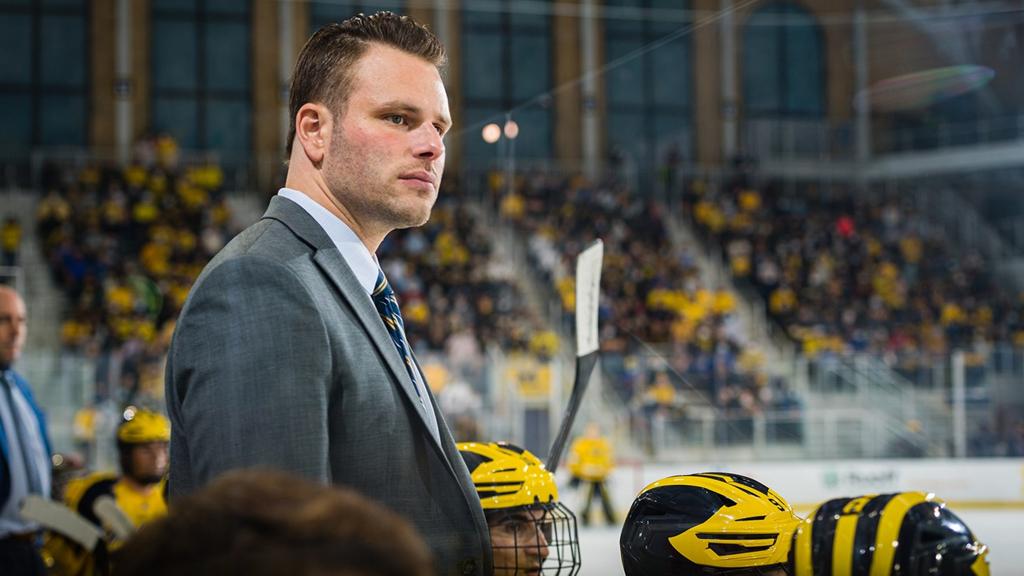 The Michigan high school hockey community celebrates the successes of its former players, whether it’s on the ice or off.

For Brandon Naurato, it’s a little bit of both.

The Detroit Catholic Central alumnus was named the interim head coach of the University of Michigan hockey program Sunday, after serving as assistant coach for the Wolverines this past season.

Naurato graduated from DCC in 2003 and went on to play two seasons in the USHL with the Cedar Rapids RoughRiders and Omaha Lancers. From 2005-2009, he played for the Wolverines under the guidance of Red Berenson, and he then played professionally for three seasons in the ECHL, IHL and CHL.

He found his calling in hockey skill development, as he built the Total Package Hockey Detroit Center of Excellence and trained some of Michigan’s best young hockey players. In 2016-17, he was hired by the OHL’s Saginaw Spirit as the team’s skills coach, and by 2018-19, he was performing a similar role with the Detroit Red Wings.

In 2021-22, he joined Mel Pearson’s staff as an assistant coach at his alma mater, and with Pearson’s removal this past week, Naurato has been promoted to bench boss in Ann Arbor.

He will have a pair of high school hockey products patrolling his blue line this season, as well, as DCC alum Brendan Miles and Hartland alum John Druskinis are set to begin their freshman seasons with the Wolverines.

Brandon Naurato was named interim Michigan hockey coach for the 2022-2023 season on Sunday. We go back to 2003 when Brandon was on the Detroit Catholic Central hockey team and they won the Division 1 State Title. @umichhockey @Nauratohockey @dcchockey @DETROITCCAD pic.twitter.com/nD4J7bqVJV